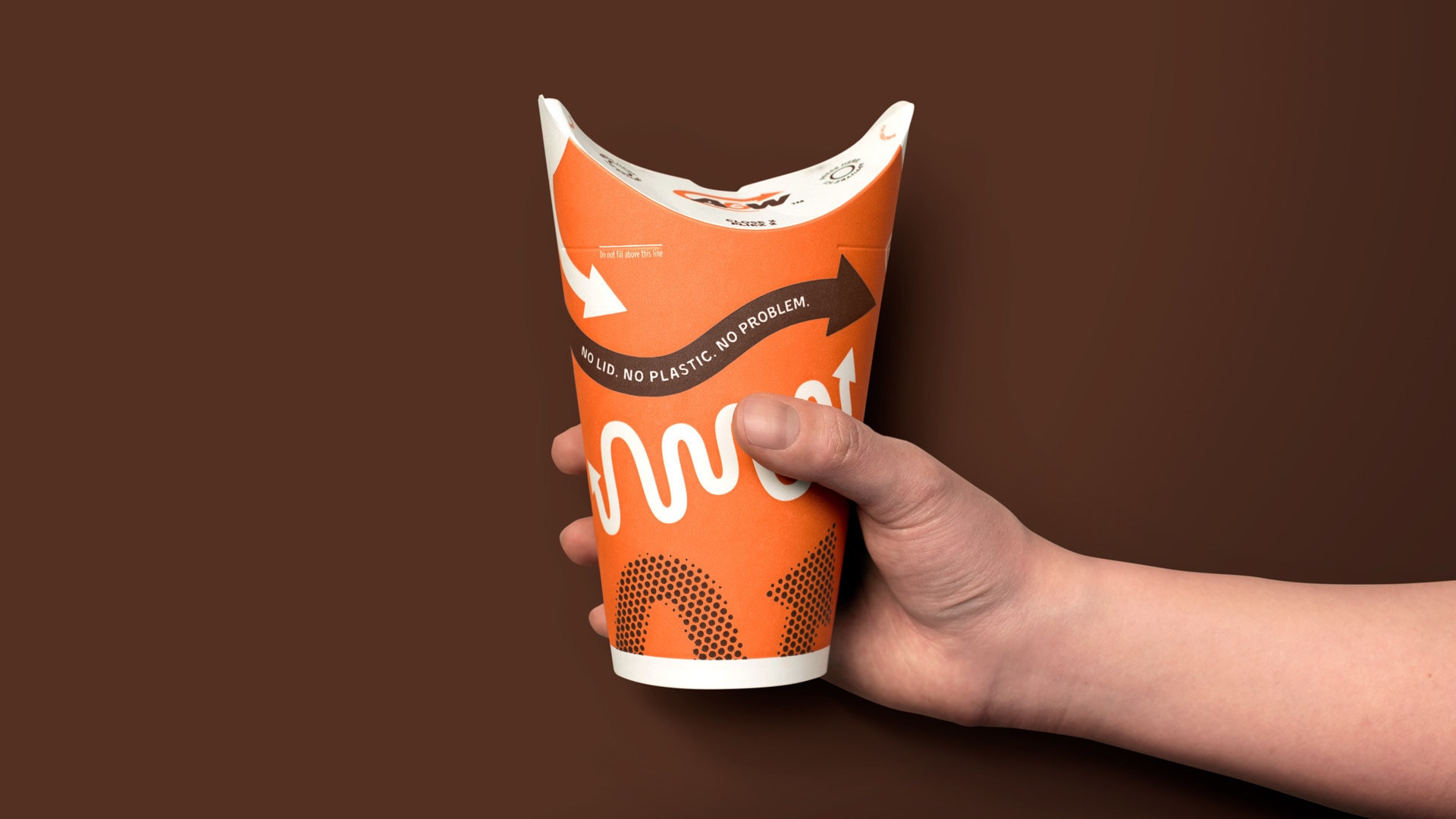 Each year, an estimated 5 billion single-use cups end up in Canadian landfills. Canadian fast food retailers have been jumping on the bandwagon of sustainability to answer government goals to reduce waste. In December the federal government introduced measures to remove ban all harmful single use plastics after examining hundreds of scientific studies and other sources of evidence, which confirmed that plastic pollution is everywhere in the environment and that it has harmful environmental impacts.

A&W’s has launched a strange-looking new cup that requires no lid or straw, contains no plastic liner, and is fully compostable and recyclable. Being dubbed “The Zero Cup”, A&W had the new drink holder made entirely of paper, with a water-based coating that prevents leaks. A&W is the first major brand in North America to use the cup. “Each year, A&W Canada serves millions of takeout drinks, so finding a more sustainable single-use cup solution is one way we can make a big difference,” says Susan Senecal, President & CEO of A&W Canada.

Environmental Sustainability is on the menu at Canadian fast food stores

Roughly 14 billion cups of coffee are used in Canada every year, according to non-profit Zero Waste Canada, of which an estimated 5 billion are consumed in single-use cups that end up in landfills. Mass adoption of a compostable coffee cup would help to substantially reduce this number by avoiding the use of plastic liners that can’t be recycled in most Canadian municipalities.

This year Tim Hortons introduced their new “white hot beverage lids” at select restaurants across Canada with a plan to extend it to all stores. The Canadian coffee and donut giant says this is “the next step in its Tims For Good sustainability platform and embracing the philosophy of continuously seeking small changes that can add up to a larger impact.”

Only 9 percent of plastic waste is being recycled in Canada

The government of Canada says that plastics can easily be recycled. They play an important role in the everyday lives of many Canadians. The truth is that only 9 percent of plastic waste in Canada is being recycled right now. “Smart, clear and collaborative regulations will help drive innovation across the country as reusable and easier-to-recycle items take their place in our economy.”, said Canada’s Environment and Climate Change Minister Steven Guilbeault upon introduction of the new regulations.

Tim Hortons says that it has been doing its part by eliminating one billion single-use plastics in 2021 that would otherwise have ended in landfills through the switch to new lids and paper straws. Tim’s also made a move to provide 100 per cent recycled-fibre napkins as well as new recyclable sandwich packaging to meet its goals. As of December 31st, 2018, A&W had already switched to 100% compostable, biodegradable and marine degradable paper straws.

Walmart and other retailers eliminating plastic shopping bags and wrappers

It’s no secret that there is a plastic waste epidemic across the world. Studies estimate there are now 15–51 trillion pieces of plastic in the world’s oceans — from the equator to the poles, from Arctic ice sheets to the sea floor. Not one square mile of surface ocean anywhere on earth is free of plastic pollution. The problem is growing into a crisis.

In December 2021 Walmart Canada announced that it will eliminate single-use plastic shopping bags. This would prevent almost three-quarters-of-a billion plastic bags from entering circulation each year. “By ending the use of single-use plastic shopping bags, we’re fundamentally changing the way Canadians shop with us for the better. This change will help to eliminate more than 10 million pounds of plastic from entering circulation each year – that’s something our associates and customers can be proud of.” said Sam Wankowski, COO, Walmart Canada

It’s no secret that plastic pollution litters our beaches, parks, streets, shorelines and other places Canadians value. It is harmful to our nature and wildlife and Canadians are demanding action. The Government of Canada is committed to ensuring all plastic packaging in Canada contains at least 50 percent recycled content by 2030.