On Christmas Eve Canadian scientists will help change our view of the universe.

*NASA announced launch will be delayed until Christmas Day 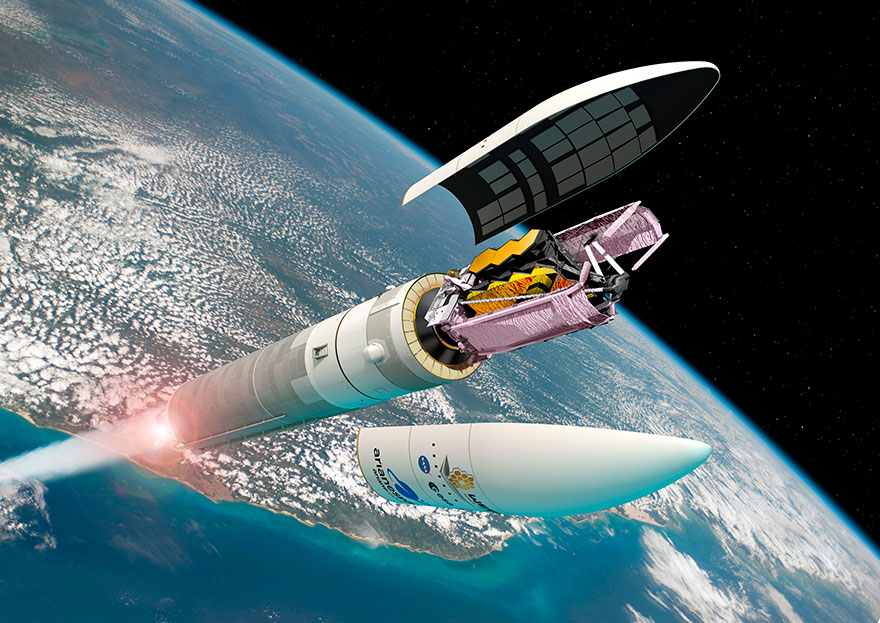 Canadian scientists will receive a long awaited early Christmas present on December 24th. The James Webb Space Telescope is the most powerful space telescope ever built, set to serve astronomers from all over the world. Webb’s powerful look into the universe will help scientists discover alien worlds like exoplanets. The telescope will let scientists learn about the life cycles of stars. It should paint a fascinating picture of the early universe. The telescope is powerful enough to see galaxies as they evolve through time.

After frequent and unavoidable launches over the last decade we are finally set to launch. The international collaboration between NASA, ESA, and the Canadian Space Agency will rocket into outer space at 7:20 a.m. EST Friday, Dec. 24 . This week the JWST team finished preparing the telescope and launch vehicle. The Canadian team will join the telescope for a momentous liftoff.

Webb will launch on the ESA-provided Ariane 5 rocket from Europe’s Spaceport in Kourou, French Guiana, on the northeastern coast of South America. Launch day coverage will be available on NASA’s website.

As one of the three international space agencies working on Webb, Canada has contributed a very important scientific instrument as well as a guidance sensor. In exchange, Canada will receive a guaranteed share of Webb’s observation time, making Canadian scientists some of the first to study data collected by the most advanced space telescope ever built. The “Fine Guidance Sensor (FGS)”, which will allow the telescope to point at and focus on objects of interest. The Near-Infrared Imager and Slitless Spectrograph (NIRISS) is a scientific instrument that will help study many astronomical objects. It will allow observers to see everything from exoplanets to distant galaxies.

The Canadian Webb science team is led by:

Researchers from a number of universities and institutes are involved in the Canadian science team:

Following a rigorous selection process, 286 proposals were selected for Webb’s first year of operations, including ten principal investigators and 72 contributions of co-investigators from Canada. Canadian scientists will be some of the first astronomers in the world to study celestial targets using the telescope. The observations will paint a picture of the early universe and of galaxies as they evolve through time.

More than 1,000 proposals from 44 countries were submitted to the Webb Telescope mission officials in order to obtain a portion of the 6,000 observing hours available in Webb’s first year of operations. The selection process was conducted by the Telescope Allocation Committee (TAC), which is made up of nearly 200 experts from the worldwide astronomical community, including about a dozen Canadian astronomers.

The telescope will allow researchers to study every phase in cosmic history. From the first light after the big bang to the formation of stellar systems hosting planets. Webb will see all. We will observe planets that could support life and witness the evolution of our own solar system.

The Canadian-made FGS will allow Webb to:

The FGS will play an important role in all scientific observations made by Webb. The instrument will offset any jitters. It will ensure the collection of clear and detailed pictures of celestial bodies in the universe.

The Canadian NIRISS instrument will enable scientists to determine the composition of exoplanets’ atmospheres. It will observe distant galaxies, and examine objects that are very close together. Using a camera sensitive to infrared wavelengths NIRISS will capture the infrared light emitted by objects. It will then gather information about the spectra of distant planets. The science team is responsible for selecting scientific targets. The use of the Canadian instrument NIRISS during guaranteed time observations made during Webb’s lifetime.

As NASA prepares for Webb to #UnfoldTheUniverse, the agency invites the public to join the James Webb Space Telescope social event on Facebook. Participants will be joined by NASA, ESA, the Canadian Space Agency, and the Space Telescope Science Institute. NASA will help you stay up to date on the latest mission activities. You can interact with Webb experts in real-time, and watch the live launch broadcast with an interactive chat.

Watch and Engage on Social Media

For more information about the Webb mission, visit: https://nasa.gov/webb