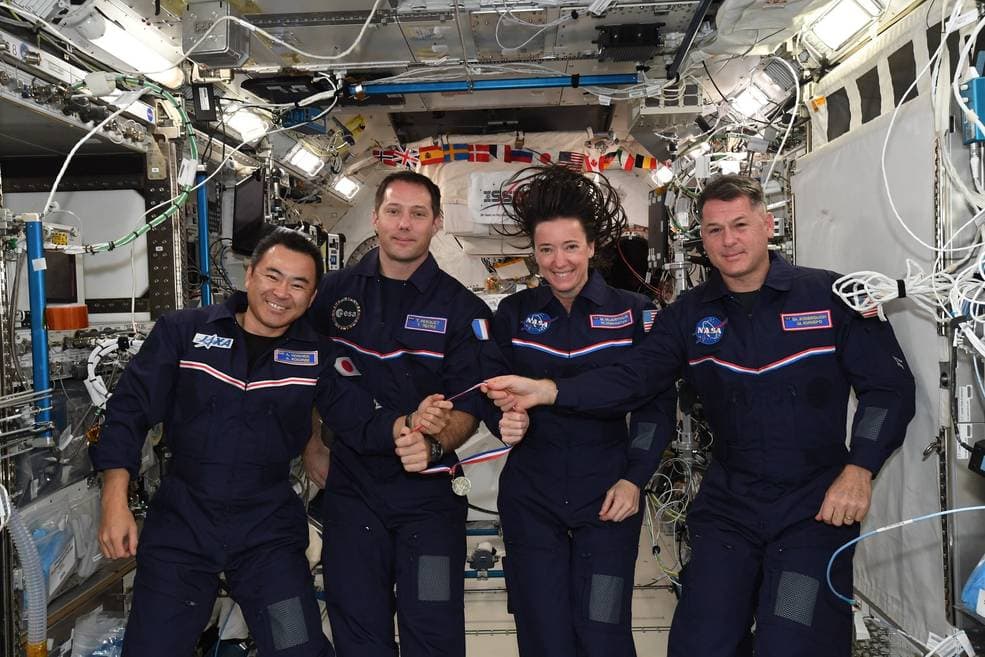 NASA’s SpaceX Crew-2 mission now is targeting a return to Earth no earlier than 7:14 a.m. EST Monday, Nov. 8, with a splashdown off the coast of Florida. The Crew Dragon spacecraft, named Endeavour, is scheduled to undock from the International Space Station at 12:04 p.m. Sunday, Nov. 7, to begin the journey home.

NASA will preview the mission on Saturday, Nov. 6 and provide coverage Sunday of the mission on NASA Television, the NASA app, and the agency’s website.

NASA astronauts Shane Kimbrough and Megan McArthur, JAXA (Japan Aerospace Exploration Agency) astronaut Aki Hoshide, and ESA (European Space Agency) astronaut Thomas Pesquet will complete 199 days in space at the conclusion of their mission. The spacecraft also will return to Earth with about 530 pounds of hardware and scientific investigations.

Endeavour now will forego a fly around maneuver to photograph the exterior of the International Space Station to allow for additional, alternative splashdown locations off the coast of Florida.

NASA and SpaceX also have a backup undocking and splashdown opportunity available Monday, Nov. 8, if weather conditions are not favorable for the primary opportunity.

The NASA and SpaceX teams will determine a primary and alternate splashdown location from the seven possible landing locations prior to return, factoring in weather, crew rescue, and recovery operations. Additional decision milestones take place prior to undocking, during free flight, and before Crew Dragon performs the deorbit burn.

NASA and SpaceX closely coordinate with the U.S. Coast Guard to establish a safety zone around the expected splashdown location to ensure safety for the public and for those involved in the recovery operations, as well as the crew aboard the returning spacecraft.

With Crew-2 splashdown Monday, Nov. 8, NASA’s SpaceX Crew-3 mission is targeting launch no earlier than 9:03 p.m. Wednesday, Nov. 10, on a SpaceX Falcon 9 rocket from Launch Complex 39A at NASA’s Kennedy Space Center in Florida. For this launch opportunity, the Crew Dragon Endurance is scheduled to dock to the space station around 7:10 p.m. Thursday, Nov. 11.

Media wishing to participate in the preview briefing by telephone must contact Stephanie Schierholz to RSVP by 3:30 p.m. EDT on Nov. 6. Those following the briefing on social media may ask questions using #AskNASA.

Crew-2 is the second of six NASA and SpaceX crewed missions to fly as part of the agency’s Commercial Crew Program, which is working with the U.S. aerospace industry to launch astronauts on American rockets and spacecraft from American soil.

NASA’s Commercial Crew Program has delivered on its goal of safe, reliable, and cost-effective transportation to and from the International Space Station from the U.S. through a partnership with American private industry. This partnership is changing the arc of human spaceflight history by opening access to low-Earth orbit and the International Space Station to more people, more science, and more commercial opportunities. The space station remains the springboard to NASA’s next great leap in space exploration, including future missions to the Moon and, eventually, to Mars.