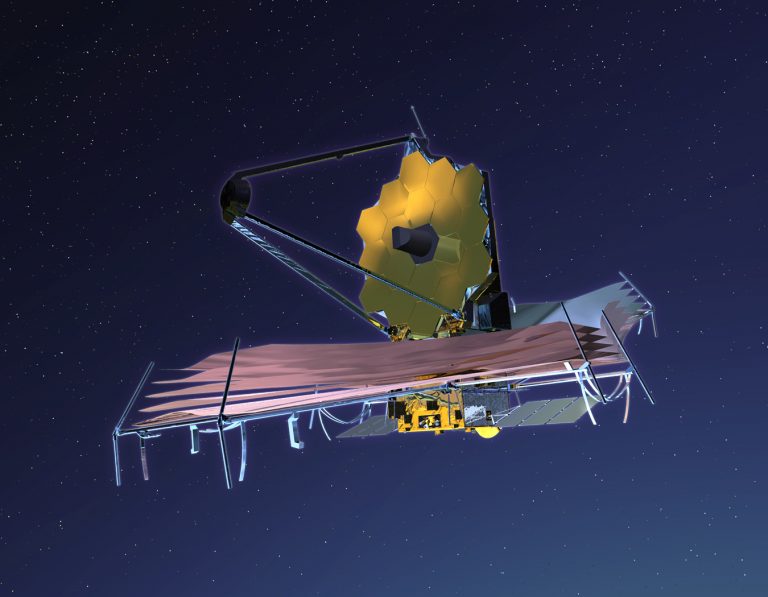 The Webb Space Telescope is an international partnership with the European and Canadian space agencies and is one of the most exciting launches in Canadian Space Agency history. It will explore every phase of cosmic history – from within our solar system to the most distant observable galaxies in the early universe, and everything in between. Webb will reveal new and unexpected discoveries, and help humanity understand the origins of the universe and our place in it.

The launch readiness date for the James Webb Space Telescope is moving to no earlier than Dec. 22 to allow for additional testing of the observatory, following a recent incident that occurred during Webb’s launch preparations. Webb was previously scheduled to launch Dec. 18 on an Arianespace Ariane 5 rocket from Kourou.

The incident occurred during operations at the satellite preparation facility in Kourou, French Guiana, performed under Arianespace overall responsibility. Technicians were preparing to attach Webb to the launch vehicle adapter, which is used to integrate the observatory with the upper stage of the Ariane 5 rocket. A sudden, unplanned release of a clamp band – which secures Webb to the launch vehicle adapter – caused a vibration throughout the observatory.

Webb will directly observe a part of space and time never seen before. Webb will gaze into the epoch when the very first stars and galaxies formed, over 13.5 billion years ago. Ultraviolet and visible light emitted by the very first luminous objects has been stretched or “redshifted” by the universe’s continual expansion and arrives today as infrared light. Webb is designed to “see” this infrared light with unprecedented resolution and sensitivity.

Webb will also be a powerful tool for studying the nearby universe. Scientists will use Webb to study planets and other bodies in our solar system to determine their origin and evolution and compare them with exoplanets, planets that orbit other stars. Webb will also observe exoplanets located in their stars’ habitable zones, the regions where a planet could harbor liquid water on its surface, and can determine if and where signatures of habitability may be present. Using a technique called transmission spectroscopy, the observatory will examine starlight filtered through planetary atmospheres to learn about their chemical compositions.

The successor to the Hubble Space Telescope has been plagued by delays. When development started in 1996, NASA expected to deploy the JWST in 2007. However, by 2005, it went back to the drawing board. The telescope was then deemed complete in 2016 but then delayed again due to its complex construction. It was only fully assembled in 2019 and then the pandemic caused yet another round of setbacks. Given the history of the JWST, you can understand why NASA wants to play it safe.

A NASA-led anomaly review board was immediately convened to investigate and instituted additional testing to determine with certainty the incident did not damage any components. NASA and its mission partners will provide an update when the testing is completed at the end of this week.

The James Webb Space Telescope will be launched on an Ariane 5 rocket. The launch vehicle is part of the European contribution to the mission. The Ariane 5 is one of the world’s most reliable launch vehicles capable of delivering Webb to its destination in space. The European Space Agency (ESA) has agreed to provide an Ariane 5 launcher and associated launch services to NASA for Webb.

Engineers on the ground will remotely orchestrate a complex sequence of deployments in the hours and days immediately after the launch of the James Webb Space Telescope. This animation shows the nominal sequence for these deployments.

Webb is an international collaboration between NASA and its partners, ESA (European Space Agency) and the Canadian Space Agency. Thousands of engineers and hundreds of scientists worked to make Webb a reality, along with over 300 universities, organizations, and companies from 29 U.S. states and 14 countries.

If you want to watch the launch of James Webb head over here and bookmark it. It will be a historic event.