A quick summary of the latest facts about the Act, and how and why it is being applied. 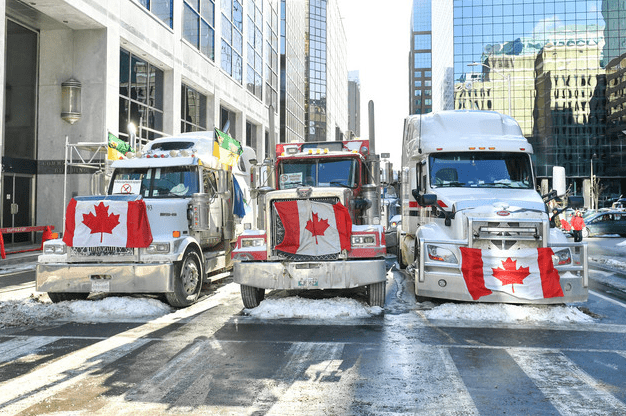 Government of Canada officials hosted a media technical briefing related to the Emergencies Act on Wednesday morning to follow up invoking the Emergency Measures Act. It was intended to clarify and expand on the new measures like asset freezing and how exactly the police will support the measure.

When asked how the Emergencies Act is justified, the question was deferred to the RCMP.

RCMP officials said it is not for them to determine justification but rather enforcement. “The role is a police officers to work within the law and this law has been enacted by the government Canada, not to determine why or where.”

The RCMP went on to relay “the activities we’ve seen across Canada, whether it be convoys across the Confederation bridge, the blocking of the New Brunswick / Nova Scotia border highways, as well as Surrey, where they’re on the port of entry, and in the large blockade there that we had on the Ambassador Bridge that police were involved in. “

RCMP want to highlight the activity in Coutts, Alberta, where significant efforts were taken to disrupt and dismantle a very, very serious threat to not only police but to what could be described as an anti-government sentiment that seemed to be pervasive within the trucker convoy.”

RCMP clarified that it is “not here to debate whether or not a law should have been enacted; however, those are some of the activities that we’ve seen, where we see serious disruption and movement of persons or goods by blocking international bridges.

The federal police representative continued: “We’ve seen the interference of those critical highway infrastructure; we’ve seen, by the seizure of firearms and 1000s of rounds of ammunition, potential for serious violence against persons and property. We never know where this particular problem may go next. Section 21A could apply for for the police have jurisdiction to to use as they see fit.”

The RCMP said, “For instance, in Ottawa, a specific mandate on protective policing and that would apply within Quebec for defined federal legislation. However, with with the new enactment of the measures, it’s not the intention of the RCMP to take over. However we would work with the police jurisdiction and have good conversations on what is required”

On of the most controversial elements of the new announcement has been the Emergencies Act asset freezing. Discussing the topic of financial freezing of assets and crypto currency, the government and police representatives focused on answering questions regarding what will happen if accounts are incorrectly frozen.

“If your account is frozen, because someone who has the same name has been identified as participating in the protest, the first thing to do is to call the bank, who will receive all the information, validate and take the necessary measures.”

New powers are being enacted though the Emergencies Act

As part of the Emergencies Act the government sees new, expanded powers to limit the activity of the protest.

1. Safeguarding vaccine clinics: Among the locations the federal government is considering critical infrastructure are hospitals and “locations where COVID-19 vaccines are administered,” which right now in this country presumably includes pharmacies and certain big box stores. Other examples of critical infrastructure are airports, harbours, railways, utility and power facilities, and international border crossings.

2. No kids at protest sites: The prohibition on bringing children to sites where these protests and blockades are occurring specifies that a person cannot “cause a person under the age of eighteen years to travel to or within 500 metres” of these demonstrations. There are exemptions for people who live, work, or are moving through these areas for other reasons.

3. Protecting war memorials: Among the locations the federal government is considering as ‘protected places’ are war memorials, in light of the acts of desecration seen in Ottawa. Specifically, that’s “any property that is a building, structure or part thereof that primarily serves as a monument to honour persons who were killed or died as a consequence of a war. Among the other protected places is the entire parliamentary precinct, which includes several federal buildings and office spaces, official residences such as Rideau Cottage, and defense buildings.

4. Complying with orders: As for directing essential services, for example tow truck drivers, the order can be made verbally or in writing and the person “must comply.” The regulations also note that the compensation “must be equal to the current market price for those goods or services.”

5. Civil litigation immunity: There is “immunity” for those who follow the orders under the act, which could mean a bank who moves in to freeze funding, or tow-truck drivers complying, shielding them from facing attempted civil action later on. The regulations specifically state “no proceedings under the Emergencies Act and no civil proceedings lie against an entity for complying with this this order.”

Prime Minister Justin Trudeau declared the public order emergency on Monday, according to the declaration made public on Tuesday, out of concern in part for the demonstrations being carried out alongside threats or acts of “serious violence against persons or property… for the purpose of achieving a political or ideological objective.”

“There is a state of emergency throughout the country justifying extraordinary measures on a temporary basis,” said Trudeau.

Among other reasons given by the government for enacting the Emergencies Act:

These additional details on the rationale for enacting the powers were issued in a proclamation published through Order in Council, on Mendicino’s recommendation.

We’ll continue to report on new information regarding the Emergencies Act asset freezing, the police role in enforcing, and the practical applications of the temporary measure.