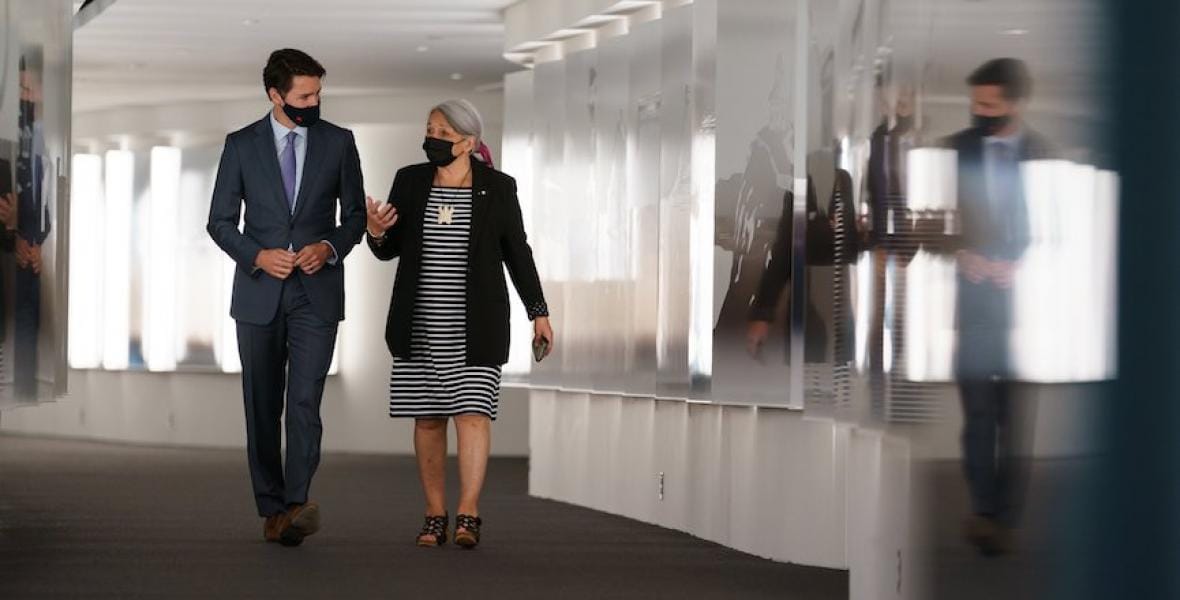 OTTAWA, ON, Sept. 15, 2021 /CNW/ – Members of the media are invited to Rideau Hall to cover an honours ceremony, at which Her Excellency the Right Honourable Mary May Simon, Governor General of Canada, will present honours to 13 deserving Canadians.

Recipients will be recognized for their courage, excellence or exceptional dedication to service with one of the following honours: a Meritorious Service Decoration (Civil Division), a Decoration for Bravery or a Sovereign’s Medal for Volunteers.

Through the social economy organization Petites-Mains, Nahid Aboumansour has helped improve the lives of immigrant and unemployed women in the Montréal area by bringing them out of isolation, facilitating their integration into Canadian society and promoting their entry into the labour market. For thousands of women, taking part in one of the socio-professional integration programs has helped them regain their confidence and dignity while contributing to the city’s social and economic development.

Diagnosed with epidermolysis bullosa (EB) as a newborn, Jonathan Pitre became known as the Butterfly Child and the public face of this rare, debilitating skin disorder when he bravely allowed his daily wound-care regimen to be recorded by local media. Committed to fighting the disease, he and his mother, Tina Boileau, helped raise awareness and significant funds for research, which has since led to greater support for other families affected by EB. Even though the disease eventually took Jonathan’s life, his story continues to serve as a source of inspiration to all.
The decoration awarded to the late Mr. Pitre will be received by his mother, Tina Boileau.

Operatic tenor and ethnomusicologist Jeremy Dutcher created the evocative album Wolastoqiyik Lintuwakonawa with his people, the Wolastoqiyik First Nation—the People of the Beautiful River—at its centre. Guided by his nation’s song-carriers, he brought forgotten, century-old wax cylinder recordings of his ancestors to life through music, honouring the Wolastoq language. Challenging western musical structures, his artistry introduces the beauty of the language to a broader audience and raises awareness of its severely endangered status.

Véronique Leduc is a model of determination and success for people who are deaf or hard of hearing. The first deaf university professor in Quebec, she works actively to break down the barriers of social exclusion and improve university and cultural accessibility for people with a hearing impairment. Through her efforts to boost self-confidence and encourage them to believe that they can achieve their dreams, she is an inspiration to an entire generation of young people seeking to reach their full potential.

A champion of human rights, Sylvie Rémillard is a model of community engagement. Founder of Sourire sans Fin, she was the driving force behind the development of this centre for family solidarity in Montérégie, which has since set the standard for mutual assistance and efforts to reduce poverty. Her dedication has given vulnerable people a place where they can flourish and be valued.

Recipients of the Medal of Bravery

On March 30, 2018, Myriam Côté saved a man from drowning in Puerto Plata, Dominican Republic. When she spotted the man in distress screaming for help, she jumped into the water and swam 30 to 40 metres toward him. Once in deep, rough seas, she asked the man to turn around, but he didn’t respond as he was struggling to keep his head above water. She then dove underwater to keep him afloat, before pulling him toward a rock, where she was able to sit and hoist him onto her lap. With another woman’s help, she then swam the man safely back to the beach.

On September 19, 2018, Régis Grégoire rescued two people from their burning vehicle in Gatineau Park, Quebec. Mr. Grégoire was driving through the park when he spotted rapidly spreading flames coming from a ditch. He pulled over and saw a crashed car with two passengers trapped inside. He entered the burning vehicle through the sunroof, unbuckled the passenger’s seat belt and pulled the man to safety. With the driver’s side door jammed shut, Mr. Grégoire attempted to remove the other victim through the shattered window, but the man’s broken legs were trapped under the crushed dashboard. Mr. Grégoire and the passenger worked together to dislodge the driver’s legs and free him from the vehicle just as it became engulfed in flames.

On March 15, 2016, Daniel McKinney saved the life of a teenage victim of armed sexual assault near Brewery Creek in Gatineau, Quebec. While heading home, Mr. McKinney was alerted to the presence of a man lying on top of a young woman who was bleeding and calling for help in a wooded area. Mr. McKinney rushed towards the attacker, who was holding a knife, and pinned him to the ground by holding his wrists to allow the victim to escape. Worried that he would lose control of the situation, he got up and walked a few steps, still holding the man and calling for help. The attacker tried to escape after hitting Mr. McKinney in the face, but Mr. McKinney managed to control the man until police arrived.

On December 25, 2017, John Schuiteboer saved the life of a young woman who was critically injured in a car accident in Luskville, Quebec. In the early hours of Christmas Day, a car collided with a hydroelectric pole, severely electrocuting the driver. Several hours later, Mr. Schuiteboer spotted the wreckage on his drive home. Ignoring the presence of live wires on the snowy ground, Mr. Schuiteboer immediately ran to assist the victim, who was now immobilized and suffering from hypothermia. He returned to his truck to call emergency services and then, despite the heightened risk of a fatal shock, he went to and from his vehicle, retrieving water for the victim until help arrived.

Recipients of the Sovereign’s Medal for Volunteers

Colleen Gray is the founder and driving force behind the Art for Aid project, an organization that fosters creativity among young artists and ships donated art supplies to Indigenous schools and communities throughout Canada. In addition to coordinating donations, she also contributes proceeds from the sale of her own art to cover shipping costs.

Former Ottawa mayor Jacquelin Holzman has been dedicated to her community since the 1960s, volunteering with such organizations as the Royal Ottawa Hospital, the Rehabilitation Institute of Ottawa and the Ottawa Hospital Research Institute. Most recently, she co-founded Compassionate Ottawa in 2016, to empower families and individuals to discuss death, dying and grief as a normal part of life, and to help people live as long and as well as they can on their own terms.

For more than 40 years, Zulfikar Nanji has been helping disadvantaged people in his community with their tax returns, while educating them on personal finance topics. He has also been a volunteer driver with the Aga Khan Foundation, transporting people with reduced mobility throughout the city.